For the second time in about three weeks, we have been hit with snow in the Chattanooga area. Last time, it caught most of us by surprise (much of the South, actually). This time, however, we were a little more prepared (or as prepared as we get, I suppose). While we were expecting some snow, I don’t think most of us expected as much as we got.

I will say this, however… while many folks around this area may not fully appreciate a good snowfall (and the inconvenience it brings), there is something about it that is most intriguing. To look out across a landscape that had been diverse – filled with beauty, flaws, focal-points both positive and negative, and works of art (some man-made, some “Creator-inspired”) – then to see it all covered with the same blanket of snow, the same texture and tone, it is as if a good snowfall becomes the great equalizer. The edges and inconsistencies of the topography disappear into one solid, flowing, undisturbed landscape of snowy perfection, punctuated by trees, ponds, and structures. Even the night seems less intimidating, less mysterious, and less ominous.

Snow and winter have long been popular subjects for writers, poets, bards, and balladeers. The great Henry Wadsworth Longfellow once wrote…

Chill airs and wintry winds! my ear
Has grown familiar with your song;
I hear it in the opening year,
I listen, and it cheers me long. ~ from “Woods in Winter”

Robert Frost painted a picture of a snowy paradise…

A winter garden in an alder swamp,
Where conies now come out to sun and romp,
As near a paradise as it can be
And not melt snow or start a dormant tree. ~ from “A Winter Eden”

“Though your sins are like scarlet,
they shall be as white as snow…” ~ Isaiah 1:18

Freshly-fallen snow paints a beautiful picture of grace. Regardless of what went on before, upon snow’s arrival,  the blemishes are forgotten, the inequities are forgiven, and below the surface, new life is waiting to be born.

However, another picture comes to mind with the invocation of snow. Think of the majesty of a snow covered mountain range. Think of the creative power displayed in the beauty of a snow-covered vista. Now, with that in mind… 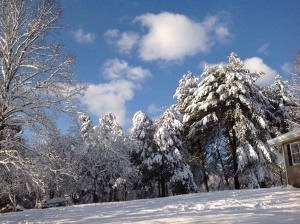 “As I looked, thrones were placed, and the Ancient of Days took his seat; his clothing was white as snow, and the hair of his head like pure wool; his throne was fiery flames; its wheels were burning fire.” ~ Daniel 7:9

Think about it the next time you encounter a good winter’s snowfall. You may not look at snow the same way.

(Special thanks to my friends who braved the cold, and shared their pictures with me.)

2 replies on “Thoughts For A Cold and Wintry Night”

Dr. Phillips what a wonderful passage today. The snow was beautiful and it does remind you of our Father. Thanks for your teachings. We appreciate you so much.

Thanks Judy. I’m glad you liked it.