When he was 18 years old, Will was injured in during a game of hockey. 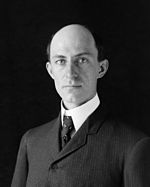 Although his injuries were not serious, depression crept in and Will became withdrawn, declining entry into an ivy-league school, and living mostly housebound. A few years later, when his younger brother (a high-school dropout) started a printing company, Will shook off the chains of his depression and joined his brother in his new business.

Sometimes we allow the smallest things to deter us from the life that God has for us. We allow our dreams to die because of the lies of an enemy who says we aren’t good enough. But God says that His plans for us are to prosper us… to give us hope, and a future (see Jeremiah 29:11).

Will (or as he was better known, Wilbur) joined his brother Orville in becoming successful businessmen and inventors. While no one remembers Will the hockey player, no one can deny the contribution the Wright Brothers made to the world with the invention of the fixed-wing airplane.