The old ’60’s television comedy Hogan’s Heroes takes on a very serious subject, World War II and the Nazi regime, but it puts a somewhat humorous face on it. One of the most ironic things about the show was the casting of the characters. Several of the prominent Nazi characters (as well as one Allied POW) were played by actors who were themselves, in fact, Jewish. Werner Klemperer (Colonel Klink), John Banner (Sgt. Schultz), and Howard Caine (Major Hochstetter) were among the Jewish cast members.

Robert Clary (Corporal Louis LeBeau) was a French Jew who survived the Buchenwald camp, but lost 12 of his immediate family members at Auschwitz. Although surviving the horrors of the Holocaust, he signed on to play Corporal LeBeau for the series’ entire run. He went on to travel throughout the U.S. and Canada, speaking on the subject of the Holocaust.

Leon Askin, who played General Burkhalter, was an Austrian Jew who was sent to an internment camp before leaving Europe for America, and actually lost both of his parents to the Nazi death camps of Auschwitz and Lublin. However, he didn’t allow his past to scare him away from his dreams. In spite of what he went through, he parlayed the hurt and pain from his past into a successful career as a character actor.
Mr. Askin once stated…

The journalists in Vienna and Austria and also in Germany call me a legend. I’m a man who lived through difficult times. I’m a man who survived the monster of all times, Adolf Hitler, and I’m still, at my high old age of 93, successful in my profession and that is the pride with which I live and survive. 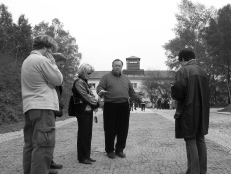 Maybe you think your past is keeping you from your dreams.

Maybe the past has you so scared that you’ve lost the ability to see a bright future.

Your loving Heavenly Father can utilize the very things you see as negative to use you in a mighty way for His Kingdom.

Don’t spend your life doing “nnnnnnnnoooo-thing” because you think you are damaged goods in the eyes of God. We serve a God Who makes all things new. He can take those bad memories and awful experiences, and turn them for your good.

Rise up! Make yourself and your past available to Him today!

One thought on “Finding Comedy Beyond Tragedy.”