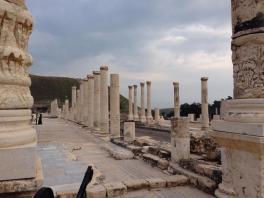 He could not believe his good fortune. He had gone from a young man in hiding to the front of the line, in a manner of speaking. This was relatively unheard of, especially for someone like him, with the physical limitations of being crippled. Yet, here he was… sitting at the table of the king. As he sat eating, he pinched himself for the five thousandth time to make sure this wasn’t a cruel dream – a dream from which he would wake and once again find himself in destitute obscurity.

“Nope… still here”, he mused, taking another bite of the delicacies set before him.

On this particular morning, the king was unusually quiet. The normal laughter and conversation that the king engaged in was replaced by a pensive quiet. The king seemed introspective today – almost sad. As he ate, his perpetual gazing out the window betrayed a mind that was lost in thought, a lifetime away. As the king reached for a piece of fruit, his sleeved slipped down from his wrist. It was then that the young lad noticed it…

As the king continued eating, the sight of the scar became a focal point. He knew the king was a fierce warrior, but there was something different about this scar – something that beckoned him to inquire about its origin. In what heated battle did this great man receive this mark? What assailant could have gotten close enough to such a skilled swordsman to make such a mark? It only took a few minutes of his mind racing for his lips to form the words, and his heart to muster the courage to break the silence:

“Sire?” he said, his voice cracking with the single syllable.

“Hmmm? What is it?” came the almost startled reply. Coming back from wherever his mind had wandered, the king shifted his attention to the lad across from him, waiting for his question.

“That scar on your wrist… In what campaign did you receive that wound?” he inquired.

The king paused for a moment, almost as if suddenly being transported back in time to an event of life-changing significance. As he began to rub the wound, a smile crossed his face.

“I received this mark in a campaign that lasted for many, many years,” he said, now turning his full attention to his young inquirer.

“But you are a most skilled warrior, my lord. What fierce enemy could have ever gotten so close as to wound you in such a way? Have I heard of this great warrior in the stories and ballads of our land?” HIs mind was racing, trying to anticipate the answer.

“Enemy?” replied the king, almost laughing. “This mark is not the result of an enemy’s rage-fueled blade. No… this mark came from one I loved more than life itself. I received this wound because of your father.”

The boy was dumbfounded. “My father???”

“Yes… your father. You see, I was a peasant. Your father was the heir to the throne. We were an unlikely pair… the statuesque son of the king, and this ruddy-faced shepherd boy. But when Jehovah chose me to ascend to the throne instead of your father, one would have thought that to be the end of our friendship.”

The king’s face lit up. “But you know what? It only made it stronger!”

“Ours was a covenant that not even death could nullify. Your father recognized the gift Jehovah had placed in me, and he was determined to see me succeed. He was the most unselfish person I ever knew. By birthright, your father should have been the next king, but he put his own ambition aside to see me succeed. I mean, even when your grandfather, the king, wanted to kill me, your father risked his own life, and the wrath of the king, to protect me. This scar is from a time your father and I made a covenant in blood that sealed our destinies. My friendship with your father taught me that we could accomplish more together than either of us could separately. There was power in our unity.”

Just then, the door across the room opened, and a slightly weary queen appeared at the entrance.

“David, there is a matter with your young son that requires your attention,” she stated, trying to remain poised.

The king laughed. “I’ll be right there, my queen.”

King David stood up, wiped his mouth a final time, and turned to his young interviewer.

“Mephibosheth, I want you to understand: Your presence here is the manifestation of the covenant between your father Jonathan and me – the culmination of a life devoted to a friendship both miraculous and wonderful. And just as a prince would (normally) be heir to a throne, you are heir to the promise I made to your father. As I loved him and had his best interests at heart, so I brought you out of Lodebar – a place of no hope – and have made you like a son. My table is your table. All of the wealth of your father is at your disposal.”

With that, King David turned and left the room, leaving Mephibosheth alone with his new-found appreciation, not only of his father, but of the power of the covenant of friendship. (For more on the story of David and Jonathan, see 1 Samuel starting in chapter 18 and continuing into 2 Samuel).

This dramatic account of a very real story illustrates the covenant power of friendship. As the lives of David and Jonathan illustrate the power of unity in friendship, we participate in such relationships on a daily basis:

Our relationship with God (a covenant Jesus died to enforce);

Holy communion (the covenant meal reminding us of our obligations in our covenant with God);

Marriage (the covenant relationship between one man and one woman);

Friendships (who is your “Jonathan”?);

Church membership (we are members of the body of Christ, and in that unity is the manifest power of God at our disposal).

As Jonathan and David found strength and purpose in their friendship, so we have power in the unity of faith with other believers. Think of the promises of Jesus:

But the miracle power of unity is not just our unity with other believers. It is also our unity with Jesus – it’s a package deal! John 15 spells out in great detail the importance of abiding in Him, as well as loving each other, and the power available to us if we do. The unity of the Spirit creates an atmosphere of peace – nothing broken and nothing missing.

So what are you waiting for? As the tabernacle of David, we must call the broken, crippled, and wayward to the table. We must go to “Lodebar” – the place of no hope – and announce to them that Someone has made an everlasting covenant… a covenant that includes THEM!!!

Who is the “Mephibosheth” you are going to seek out?