Throughout the last campaign season and continuing on through the first three months of this year, we have all heard the phrase that has become a staple of public discourse — the allegation and labeling of certain news reports as “fake news”.

We’ve come a long way from the days of Walter Cronkite — the most trusted man in America. Nowadays, “news” reports are peppered with opinion, innuendo, and bias from the very people who are supposed to be objectively reporting what is going on. From the very beginning of many news reports — especially those pertaining to President Trump and his administration — the commentary is framed in such a way as to support a conclusion that may or may not be factual.

Recently, President Trump came to Nashville for a rally. Since Nashville is a couple of hours from where we are in Chattanooga, one of my staff members volunteered to go to the rally and report back what he observed with his own eyes. Here is what he had to say…

After meeting up with a couple of friends outside of the city, we drove to the Nashville Municipal Auditorium for the rally with President Trump. We parked about 4 blocks away (after navigating through streets that were blocked off for security reasons), and walked to the auditorium. At the point at which we reached the venue, it was a little after 2p.m., with the start time of the rally scheduled for 6:30p.m. Upon walking past the front of the venue, we noticed lots of police, Secret Service agents, barricades, and people. The line had long-since formed, and stretched out of sight. There was a small area cordoned off near the entrance where a handful of protesters had gathered. The few signs on display addressed an array of topics and grievances, some of which were fairly odd. If you counted everyone in that area (sign or no sign) as a protester, there might have been about 20.

We proceeded past the entrance on the long walk to the end of the line. The crowd was calm, well-behaved, and respectful. Lots of smiling faces of people eager to see the President as people conversed, laughed, and occasionally broke into spontaneous cheers of “USA!… USA!…” and “Trump!…Trump!…”. There were a handful of street preachers with loudspeakers, preaching a message of salvation to a crowd who, for the most part, remained respectful of their right to be there. It was obvious that these people were not there to protest, but were simply there to use the opportunity to share the message of the Gospel with a fairly captive audience. When one of the bystanders engaged one of these men in a conversation, the street-preacher exclaimed that he had been to “other” events, and the current crowd was much more well-behaved and respectful. It was around 2:30p.m. when we finally made it to the end of the line. According to Google Maps, we were about 8/10 of a mile from the entrance. We got in line and began the long wait. Within 10 minutes of standing there, the line grew to extend roughly 150 yds. beyond the point where we were standing. Within 20 minutes, the line was once again out of sight. As we stood in the sea of red “Make America Great Again” hats, I was struck by a few things. In spite of the cold (and it got much colder), people weren’t complaining. The crowd itself was made up of young and old, men and women. There were a lot of high-school and college aged young people, as well as a lot of children. There were people dressed comfortably (sweatshirts and jeans), and others who were attired much nicer. There were poor people there. There were affluent people there. When the street vendors came by with hats, shirts, and buttons, people engaged them in conversation and broke out their wallets to purchase their wares. When the (very) occasional protester happened by with their signs (some of which were quite misguided and/or offensive), the crowd remained respectful and for the most part, did not engage them, even in the face of their contrary (and even bizarre) viewpoints. Those who chose to engage did so without name calling, or hate-filled aggression, but simply spoke to them about their grievance of choice, and shared why they believed them to be in error.

At 3:30p.m., the doors opened and the line began to inch forward. At one point, there was a commotion of police lights, and a huge cheer went up as the Presidential motorcade passed by. It was interesting to see strangers become friends, and listen to the conversations about the hope people felt in America once again.

As the line continued to move forward, the sun continued to set, and the temperature continued to drop, the crowd remained vigilant in their determination to see the President. At one point, after standing in line for more than two hours, one of the people standing next to me got a news report from one of the local news agencies on their phone. It was being reported that “hundreds of protesters had gathered to protest Trump”. We couldn’t help but laugh. From start to finish, we witnessed maybe 50 people protesting. Some of the signage of people we initially thought might be protesters turned out to be people who, with no chance of getting in, decided to utilize their time carrying signs in support of the President, and essentially being cheerleaders as they walked up and down the crowd, cheering on those in attendance.

We were roughly 2/10 of a mile from the entrance when President Trump took the stage. Those of us outside broke out cell phones, and watched the LIVE feed of what was happening inside. As the line sped up slightly, we remained hopeful that we would still make it in before the President finished.

We made it to within 40 feet of the doorway when the President began to close his remarks, and knew at that point that our 4-hour vigil had been in vain.

But actually… it hadn’t for me. I had come for the experience of witnessing first-hand what a Trump rally was about, and while I never made it to the doorway, I think I got just as good a sense of that during my time standing in line. What I witnessed was a lot of people who love our country and wanted to support a President who shares that love. The full house of nearly 10,000 people inside was what the country saw in news clips and social media stories. What they didn’t see was the literally thousands of people who stood faithfully outside, and never made it in… people who still felt pride in being there to support a President who has taken a lot of heat for standing up for them.

Well, my fingers and toes have finally thawed out, and I am thankful for the (albeit chilly) experience of spending a few hours with other Americans who have renewed my faith in the goodness and kindness of her people.

Whoever walks in integrity walks securely, but whoever takes
crooked paths will be found out. 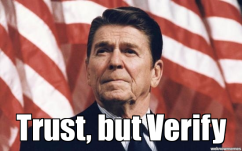 In this day and time, finding out truth is not as complicated as it would seem. I believe we have become so used to instant gratification that we determine truth the same way. “If the media says it, it must be true”, may have had some relevance in times past, but today we live in an age where people speak before the truth is known, and report before all of the facts are in. I have seen it become such a vicious cycle: Someone reports a story which is proven to be false, then tries to manufacture data or spin the story in such a way as to try to maintain some degree of credibility. It seems that people have lost the ability to say “I was wrong”, when in fact those three words are a crucial starting point to regaining lost credibility. Oftentimes, an apology can get a lot better response than a defense.

Truth is not subjective. Truth is not open to interpretation. There is not such thing as “your truth” and “my truth”. Truth stands on its own power and authority. The Bible puts a great deal of importance on truth as we read…

The LORD detests lying lips,
but He delights in people who are trustworthy. ~ Proverbs 12:22

I think if we all slowed down and took more of an interest in the truth, we would find that honesty is still the best policy, and that being truthful in the first place is less exhausting that than the ensuing damage control involved when we sacrifice our integrity.

We might also find that the place of truth is the starting point of finding favor with God.