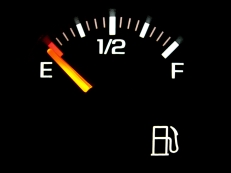 In May of 2002, I was preaching a crusade in Nigeria. After about a week of wonderful meetings, it was time to once again climb aboard a plane and head back across the Atlantic. As we were about to leave, we were praying with our host pastor, Dr. Nick Ezeh, and rejoicing in what God had done in the meetings. After saying our goodbyes, we turned and walked into the terminal only to be confronted by these disturbing words on the flight schedule screen:

Now, in the U.S., this is not really a huge issue. When a flight is cancelled, most of the time, there is another flight within hours. However, since we were in Calabar, Nigeria, and not Cleveland, Ohio, this was not the case. If we missed our connection in Lagos, the next available flight was FOUR DAYS LATER!

At this point, our team shifted into overdrive, trying desperately to speak to someone who might have a solution to our dilemma. We quickly discovered that there was a flight to Lagos from another town called Port Harcourt. The flight was scheduled to leave in 3 hours and 45 minutes. Great, right? Except for one small problem…

Port Harcourt was 3½ hours away.

If we left immediately, we would have a fifteen minute margin of error. If we hit traffic, had any mechanical issues, or were in any other way delayed, chances were good that we would not make our connection, and would have to get comfortable for a four-day layover. Our team quickly gathered all of our gear, and got back into the vehicles for the long ride to Port Harcourt.

Now, one thing about Nigeria is that twice a year they shut down all of the oil refineries for a week or two for scheduled maintenance, thus creating shortages, rationing, and gas station shutdowns all over the country. It just so happened that that shutdown fell during our visit. The whole time we were there, we witnessed lines at gas stations that made the U.S. gas lines of the 1970’s look like the express line at Wal-Mart. About an hour into our drive, I glanced down at the gas gauge of our borrowed vehicle, and noticed that the needle was below empty. Our driver, a very nice Nigerian gentleman by the name of A.G. Bright didn’t seem too concerned. I leaned forward and asked him if the gauge was broken.

“No, my brother,” he answered, “but God will provide, for we prayed for mercy on this journey. Also, you and Dr. Ezeh are God’s men… He will surely see us through.”

It is difficult to admit this, but my faithless soul was not comforted. As we drove on, my mind was filled with visions of our stranded team, standing by our vehicles in the middle of the sweltering Nigerian jungle, or worse, being taken captive by rebels or robbers.

As my mind raced through the worst possible of scenarios, all of a sudden, I heard the sound of singing. Mr. Bright had started singing praises to God, and was quickly being joined by others in the vehicle. As the praises went up from our SUV, my faithless heart still continued to fret, expecting our engine to come to a grinding halt at any second. However, after another HOUR of unrelenting driving, we came to a crossroads, with a gas station that stood like an oasis at the intersection. As we pulled in, we questioned whether or not it was even open, since it was without the massive lines we had witnessed everywhere else. Upon discovering that it was open, we soon found out from the proprietor that the station had been closed for a week due to the fuel shortage, but that he had just received a shipment, and was actually re-opening his station AS WE PULLED UP!

A smiling A.G. Bright looked at me and said, “See, Pastor Phillips… God always takes care of His servants. You are in favor with God!”

While I originally told this story several years ago, it remains true today. Unlike the 3-month-old salad dressing in your refrigerator, truth does not have an expiration date. We face challenges on a daily basis. Turmoil in our financial markets, uncertainty and unrest about the state of our nation politically, and chaos and disquiet in various hot-spots around the globe make it difficult to have faith. Yet having the favor of God is not dependent upon who is king, prime minister or president. The favor of God does not hinge on “bull markets” or diversified portfolios. The favor of God is not even affected by our immediate circumstances… our job, our family, or even our gas gauge. The favor of God is about His goodness and His faithfulness. We receive God’s favor, not because we are good, but because HE is good.

Driving down those dirty, pot-hole infested roads of Nigeria that day, Mr. Bright became a shining example of how we get ahold of that favor.

Mr. Bright prayed… He prayed a prayer that said, “God, here is what I am expecting, and no one will be more surprised than me if You don’t come through.” (Contrast this with the prayer that many of us pray: “God, here is my need, and I will be shocked if You actually answer me.”

Mr. Bright walked by faith… He put his proverbial “money where his mouth was”. He had no choice but to move forward by faith, and he did it with gusto, literally driving into the unknown with nothing but a belief that God is true to His word and to His children.

Mr. Bright worshipped… He didn’t sit there and fret about the gas gauge. He opened his mouth and declared God’s goodness and faithfulness in advance.

“The Lord bless you
and keep you;
The Lord make his face shine on you
and be gracious to you;
The Lord turn his face toward you
and give you peace.
So they will put my name on the Israelites, and I will bless them.”
~ Numbers 6:24-27

That is the kind of favor I want.

One thought on “Got Favor?”