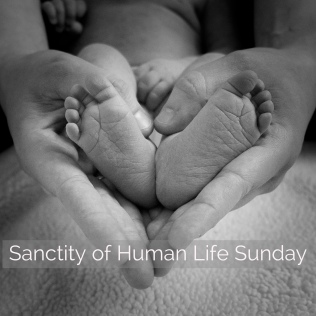 As we pause to reflect on this Sanctity of Human Life Sunday, we recognize the holocaust that has taken place in our own nation since 1973:

60 million dead… victims of the abominable act of abortion.

But the decision to continue this barbaric practice will not be without cost. In God’s Word, we find a message of warning to pastors, leaders, the media, and politicians…

If thou forbear to deliver them that are drawn unto death, and those that are ready to be slain;
If thou sayest, Behold, we knew it not; doth not He that pondereth the heart consider it? and He that keepeth thy soul, doth not He know it? and shall not He render to every man according to his works? ~ Proverbs 24:11-12

This holocaust is still being tolerated in America. This horror is called a civil right and a woman’s choice. Hundreds of thousands are marching for the cause of Life in Washington DC, yet only the Fox network is covering this event. Admirably, our President and Vice President have spoken in support of life for the unborn.

To pastors of all backgrounds, I say this: This is not political… it is moral. Hitler silenced both the German church and the Vatican. How did he do it? By saying that the genocide of Jews was a political argument, not a moral one. Jews were viewed by the Nazis as less than human.

The worship of Molech included the murder of newborn children by passing them through a fiery oven. Their screams could be heard in the valley of Hinnom.

God hears the silent screams of these murdered humans. Each child victimized by the act of abortion is precious in His sight. Their cries rise up before Him, and He has not forgotten a single soul.

Church… pastors… it’s time to speak out! Babies of all races are being slaughtered. This is not black, Hispanic or white. This is not Republican or Democrat. This is not political. This is right vs. wrong. This a moral, spiritual, and human rights issue.

The time for silence is past. The time to speak up is now!