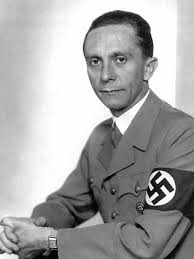 Joseph Goebbels was propaganda minister for Adolf Hitler in Nazi Germany. He was the man responsible for propagating the demonic lies that led to World War II and the slaughter of millions of innocent people, including six million Jews. He said,

“If you tell a lie big enough and keep repeating it, people will eventually come to believe it. The lie can be maintained only for such time as the State can shield the people from the political, economic and/or military consequences of the lie. It thus becomes vitally important for the State to use all of its powers to repress dissent, for the truth is the mortal enemy of the lie, and thus by extension, the truth is the greatest enemy of the State.”

For at least the last decade America has repeatedly been fed “lies big enough” to now seem to be the truth to many citizens. Swallowing the propaganda of a progressive ideological agenda, our spiritual and moral base has eroded to the point that America is no longer recognized as the world’s leader in moral and spiritual convictions. America has become a caricature of her former self. 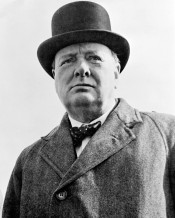 It was Winston Churchill who said,

“A lie gets halfway around the world before the truth
has a chance to get its pants on.”

It is time for us to “put on our pants” and tell the truth before it’s too late. With twenty-four hour news cycles and a common stream of information on the internet, it is no longer acceptable to say, “I did not know what was going on.”

No nation or civilization has ever survived the radical decline we are seeing at this present hour! Edward Gibbon’s book, Decline and Fall of the Roman Empire, astonishingly parallels our own decline in America.

Listen to Gibbon as he speaks of the insidious termites that were eating away at the foundation of a decaying culture. He lists five marks of the decaying Roman culture:

“It was scarcely possible that the eyes of contemporaries should discover in the public felicity the latent causes of decay and corruption. This long peace, and the uniform government of the Romans, introduced a slow and secret poison into the vitals of the empire. The minds of men were gradually reduced to the same level, the fire of genius was extinguished, and even the military spirit evaporated. Their personal valour remained, but they no longer possessed that public courage which is nourished by the love of independence, the sense of national honour, the presence of danger, and the habit of command. They received laws and governors from the will of their sovereign, and trusted for their defense to a mercenary army. The posterity of their boldest leaders was contented with the rank of citizens and subjects. The most aspiring spirits resorted to the court or standard of the emperors; and the deserted provinces, deprived of political strength or union, insensibly sunk into the languid indifference of private life.”

Will America follow the footsteps of the Roman Empire? Will she permit the continual erosion of her proud heritage? I do not believe it will ever happen as long as we remember it is not just military might and economic strength that keep us safe and secure within our own borders.

America has lost its way morally and spiritually and that is where the danger lies. I contend that America has been invaded not by military forces, but by spiritual forces that are at work at this present hour to undermine the root system that has produced the fruit of freedom and liberty around the world. The bright light of the Gospel of Jesus Christ has shown in the darkest parts of the world simply because believers united in a common cause of sharing the good news of Jesus Christ.

The culture war is going on in every segment of society, from the board room to the class room, and from the White House to the church house. We are seeing a major shift in attitudes and actions that once defined us as the greatest nation on earth. Main-stream media has aided and abetted the ongoing nudging of America toward a progressive agenda, effectively lowering our moral and spiritual standards.

As the foundation grows weaker, the attacks on Christianity grow bolder and are seen in all parts of the world. War has been declared on Christianity in every part of the Middle East, with reports of Christians being beheaded at the bloody hand of ISIS (or ISIS related groups).

In America, the assault on the lives of Christians happens so often it has almost become commonplace to the masses. The assault on traditional values can best be seen in a recent survey conducted by Gallup. In May 2015, Gallup conducted a survey showing that Americans are becoming more liberal on social issues. Based on the responses of both conservative, liberal, and moderate Americans, the survey reports:

“Americans are becoming more liberal on social issues, as evidenced not only by the uptick in the percentage describing themselves as socially liberal, but also by their increasing willingness to say that a number of previously frowned-upon behaviors are morally acceptable. The biggest leftward shift over the past 14 years has been in attitudes toward gay and lesbian relations, from only a minority of Americans finding it morally acceptable to a clear majority finding it acceptable.

The moral acceptability of issues related to sexual relations has also increased, including having a baby outside of wedlock– something that in previous eras was a social taboo. Americans are more likely to find divorce morally acceptable, and have also loosened up on their views of polygamy, although this latter behavior is still seen as acceptable by only a small minority.

This liberalization of attitudes toward moral issues is part of a complex set of factors affecting the social and cultural fabric of the U.S. Regardless of the factors causing the shifts, the trend toward a more liberal view on moral behaviors will certainly have implications for such fundamental social institutions as marriage, the environment in which children are raised, and the economy. The shifts could also have a significant effect on politics, with candidates whose positioning is based on holding firm views on certain issues having to grapple with a voting population that, as a whole, is significantly less likely to agree with conservative positions than it might have been in the past.”

Adapted from my most recent book,
The Unraveling of America
by Dr. Ron M. Phillips
with Dr. J. Tod Zeiger
© 2016 Abba’s House Media