With recent events in our nation, we are a people in fear…

The Oklahoma tornadoes. We are afraid of forces of nature we cannot control.

The Boston Marathon terror attack. We are afraid of an enemy we cannot see.

Government scandals at the highest levels. We are afraid of a corrupt government that we can no longer trust.

Quite honestly, we’re not just afraid of the shadows… we’re afraid of our own shadows.

I believe that fear was Job’s fatal flaw. Job stated that “… the thing I greatly feared has come upon me, and what I dreaded has happened to me.” I think that Satan knew that fear was Job’s “Achilles heel”, and was drawn to that flaw like a moth to a flame. But Satan’s attack on Job was not just about picking on a righteous man… his attack on Job was a part of a greater strategy:

But now stretch out your hand and strike everything he has, and he will surely curse you to your face. ~ Job 1:11

Satan’s strategy was to use Job’s fear as a catalyst for him to turn his back on God. Everything that Job went through was simply for the benefit of Satan seeing Job shake his fist at God, and curse Him to His face.

So what fear has you paralyzed?

Fear of the enemy?

Fear of the future? 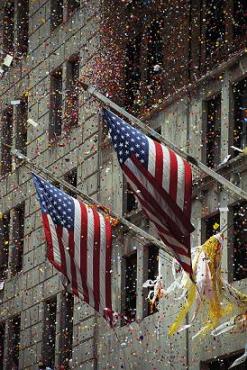 I could go on and on for days. But the fact of the matter is that, because of our fear, we have allowed the enemy to build a stronghold in America. While the voices of ungodliness and fear are running amok, the real voices of truth and hope have been cowed into a corner of anti-Christian, anti-American, and un-Constitutional silence.

We have called evil “good”, and good “evil”.

We have embraced our enemies while alienating our friends.

We have slaughtered the innocent in the name of “choice”, while rabidly fighting for nonsensical liberal causes in the name of being “conscientious”.

We (as the church) have sacrificed morality, decency, and holiness on the altar of moral relativism, self-improvement, and dead works.

In trying to avoid controversy and conflict, we have given the reins of power to the ungodly and corrupt. By “going along to get along”, we have remained silent in the midst of a chorus of voices that mock our sacred beliefs. By compromising with evil at every turn, America has made a covenant with Death.

Now, are you ready for some good news? When Satan attacked Job, he failed at his primary goal. In everything that he went through, Job reiterated one sentiment: “Blessed be the name of the Lord.”

On Sunday, May 26, 2013, I will be returning to the pulpit of Abba’s House with a powerful word… for our church, our community, and our nation. I am going to let you know that there is, in fact, hope for America! You do not want to miss this important message.

2 replies on “America: A Covenant with Death”

Praise God there is still hope for America. Lord please use me and my wife anyway You choose to use us. We will obey!

Wow! How I see what you are talking about…Fear is everywhere. I know that I have had to deal with fear from all sides. I praise God for those experiences because they have taught me to overcome a lot of my fears over the years. As terror surrounded me back in 1984, God gave me these words that I focused on; these words were from His Word and they were: Do not fear, what can man do to you.I kept those words in my heart and mind to the place where I went to the opposite extreme of not fearing anything. Yes, I became 10 foot tall and bullet proof! He also led me to Isaiah. And as Isaiah said, “Here am I send me”; I have also said. Here am I Lord–send me.