In 1983, Disney produced a film adaptation of the 1962 Ray Bradbury novel, Something Wicked This Way Comes. It is the story of a mysterious carnival that comes to Greentown, Illinois, and is run by a character named Mr. Dark. While the carnival at first appears entertaining and thrilling, two young boys discover that the carnival and it’s proprietor have a much darker purpose… the acquisition of innocent souls for condemnation. The film was promoted with the tagline…

For every desire, there will be a cost.

Just as, in 2011, the United States experienced it’s first-ever fiscal downgrade (by Standard & Poors), America is in the midst of experiencing a demonic downgrade. For the last 50 years, America has been experiencing a fundamental shift from our founding Judeo-Christian roots to a nation I hardly recognize. And now, we are seeing our faith, our freedom, and our very foundation under a full-scale attack from the forces of darkness… an attack that began with the removal of Scripture and prayer from our public school system. This victory led to an attack on any Judeo-Christian reference in the public arena. Our timeless symbols such as the cross, the Star of David, the Menorah, and the manger scene (among others), have been deemed unwelcome. Political correctness has not just invaded the statehouse, however… it has cooled the fervor of preaching and witness in America.

Our government “of the people, by the people, and for the people” has been replaced by an “all-seeing, all knowing, all-controlling” government that is now attempting to take over every aspect of our private lives. Because America has abandoned God, our protective covering has been removed, and we have been invaded by demonic entities. We saw the same thing happen 81 years ago when evil in the form of a man named Adolph Hitler took the reins of power in Germany, and began his Islamic-sanctioned attack on the Jews (the Islamic Grand Mufti (mayor) of Jerusalem (at the time) later traveled to Germany and personally endorsed Hitler’s Jewish “final solution” – the Holocaust).

So, take a look at where we are today…

While I could go on and on, the fact of the matter is that only demons could orchestrate such a rapid decline of a once God-fearing nation.

In order understand the significance of these things, and how we can fight back against the spiritual forces of wickedness that are influencing public policy in America, we must understand what brought about the circumstances that created an environment conducive to such Godless behavior. 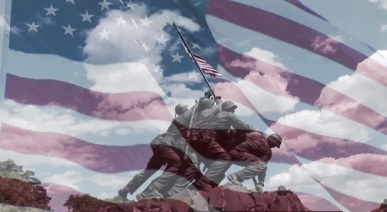 This Sunday (June 29), we will be celebrating the birthday of our nation (5 days early) at Abba’s House with All-American Day. We love our nation, and believe in the principles that made this country great… faith, family, & freedom. Our worship ministry will be performing a number of patriotic songs, we will honor our veterans and armed services, and I will bring a message entitled Upgrading The Demonic Downgrade of America. If you love our nation like I do, join me as we find out together what it is going to take to put her back on the right track.

If you are in the Chattanooga area, I invite you to come and join us. Our service begins at 10:30a.m.

If you follow my blog from a distant city or state, and cannot join us in person, you can watch us online at abbashouse.com  Click on this link to watch us live.

Join with me, and let’s enter into this season of national pride and celebration on our knees, with the determination that we will once again be “one nation under God” — for generations to come.

One reply on “The Demonic Downgrade of America”

Thanks for sending! I had no idea I could watch your services! I will try to watch!