This week, our nation lost two greats in the entertainment industry. On Tuesday, iconic actress Lauren Bacall passed away at the age of 89 after reportedly suffering a major stroke. The wife of legendary actor Humphrey Bogart, Ms. Bacall appeared in dozens of movies and television shows. Having outlived her husband by over 50 years, she lived a long life beyond the grief of loss, and went on to be an award-winning actress, known for her cynical humor and her straightforward personality. She once said…

I figure if I have my health, can pay the rent, and I have my friends, I call it ‘content.’ 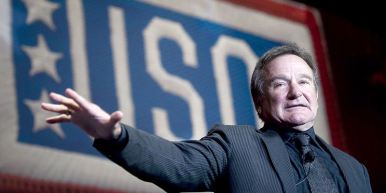 But while the news of Ms. Bacall’s death was being announced, the world was still reeling from the shock of the news, just the day before, of the death of actor Robin Williams. At the age of 63, leaving a loving family, devoted friends, and a successful career including several movies currently in production, Mr. Williams committed suicide in his home just outside of San Francisco. As the news was confirmed of the manner of his death, a collective “why???” went up from the general public. Known not just for his talent as both a funnyman and a dramatic actor, Mr. Williams was, by all accounts, a kind and generous person as well. Testimony after testimony — of family, friends, and complete strangers — over the past few days bears this out. Friends and co-workers went on talk shows and discussed what a kind person he was. Strangers on social media posted pictures from meeting him on the street, and talked about how gracious he was. An entertainment icon, an Academy Award-Winning actor, a genuine humanitarian (as evidenced by his multiple trips in support of our troops overseas, as well as work for charities like St. Judes Children’s Hospital)… what makes a person with that kind of success choose to end their own life?

A 2011 CDC report states that suicide is the #2 cause of death in Americans aged 15-34, and the #3 cause in adults ages 35-44. While no case is exactly the same, the reasons for suicide are often related to personal loss, depression, financial stress, and family issues. In the case of Mr. Williams, struggles with substance abuse, career issues, and severe depression were cited as possible contributing factors in his death.

So how do we go forward, as a society, and stem the tide of the plague of suicide in our nation? What can we as individuals and Christians do to stop this tragedy from touching those close to us, in our circles of influence?

First of all, we need to open our eyes. As believers in Christ, we make it a point to say that “we are in the world, but not of it”. For many, however, being “not of it” tends to make us mentally disconnect from what is going on around us. Although He came as the King of Heaven, Jesus was keenly aware of the pain and suffering going on around Him. Jesus reached out to the needs in the world as He encountered them: He fed the hungry, He healed the sick, He raised the dead. He ministered to the big crowds, but He also dealt with people one-on-one, sometime in the secretive dead-of-night (see John 3 – story of Nicodemus). Just as Jesus did, we must take notice of those around us, and be proactive when confronted with need. It is the example of Jesus that offers hope to those in need of it.

We must listen without judging. One person’s minor irritation is another person’s major crisis. Without the knowledge of where another person has been, we cannot assume to know exactly what they are feeling. So many times, we want to give advice without knowing all of the facts. Take the time to listen — REALLY LISTEN — to what someone is saying, and make it a point to listen, not just to what they are saying, but to how they are saying it. Learn to read between the lines. Love, manifested in genuine concern, has a way of bringing pain to the surface.

A friend of mine had a brother who committed suicide when he was younger. He shared with me that, while he knew his brother was having some problems, he didn’t know to what extent. As it turned out, there was more going on in his brother’s life than he knew, because he would share one thing with one person, and another with someone else. It wasn’t until after he passed away that friends and family members put all the pieces together, and began to comprehend the extent of his sorrow and pain. Take the time to sit down, share a cup of coffee (or 10), and just listen. Sometimes, that very act lets a person in pain know that they are not alone. Sometimes, a soft touch and kind word can give that person the resolve to live another day. Former talk-show host Phil Donahue once made a very true observation…

Suicide is a permanent solution to a temporary problem.

Finally, we must see people for who they are. We are all unique creations of the Creator. We all have extreme value in the eyes of God. We are all challenged in different areas, and the problem of depression is no less real than diabetes, heart disease, or cancer. Sometimes depression can be the result of wrong choices we make in everyday life. Sometimes, it can be the result of a chemical imbalance. As a minister who has dealt for years in Spiritual Warfare, I know that some types of depression are demonic at their root, whether handed down through generations (generational curses), or demonic doors of depression that are opened through one’s own actions. Regardless of the reason and just like any disease, depression (and mental illness) must be properly diagnosed in order to be dealt with. Individuals suffering from depression must know they have people who love them standing beside them, caring and not critical. They must be encouraged to get the help they need, whether physical, psychological, or spiritual (or oftentimes, a combination).

I encourage all of you reading this today: Be the light of the love of Jesus in another person’s life. Love the misunderstood. Reach out to the “unlovable”. Learn to recognize pain in the eyes of those around you. If someone needs to talk, be that ear. If they need to cry, be that shoulder. If they need more help than you can give, be that companion that accompanies them to the pastor or counselor who can help. Make it a point to make every person you come into contact with know, beyond a shadow of doubt, that they are not alone in this world.

3 replies on “When The Laughter Goes Silent”

Powerful and helpful Pastor Ron. I think one thing we can all take from this posts is the importance of slowing down and taking the time needed to love those around us. If a person knows a follower of Jesus, they should NEVER not have someone to call in the darkest of times.

that it is so important when we have visitors in our churches irregardless of what they look like, young ,old, poor or not so poor they just don’t just feel welcomed but they can feel the love and the accaptence of Christ in that fellowship because you don’t know what they are thinking and they come to our churches seeking hope and love from those who claim to be his followers